Design experiences for navigators to send the lightest rover to the moon in 2021.

Design the Lightest Rover to Land on the Moon

The last time NASA has sent anything to the Moon was in 1972. It has been almost 50 years since we haven't been back there again. In 2018 December, NASA announced its plan to return to the Moon, but this time with the help of 9 private companies.
‍
One of the companies, Astrobotic, is creating is a light-weight lunar rover of 4.4-lb. (2 kilograms) called CubeRover, also known as the Iris Rover. The four-wheeled Iris will be America’s first robotic rover to explore the moon’s surface. 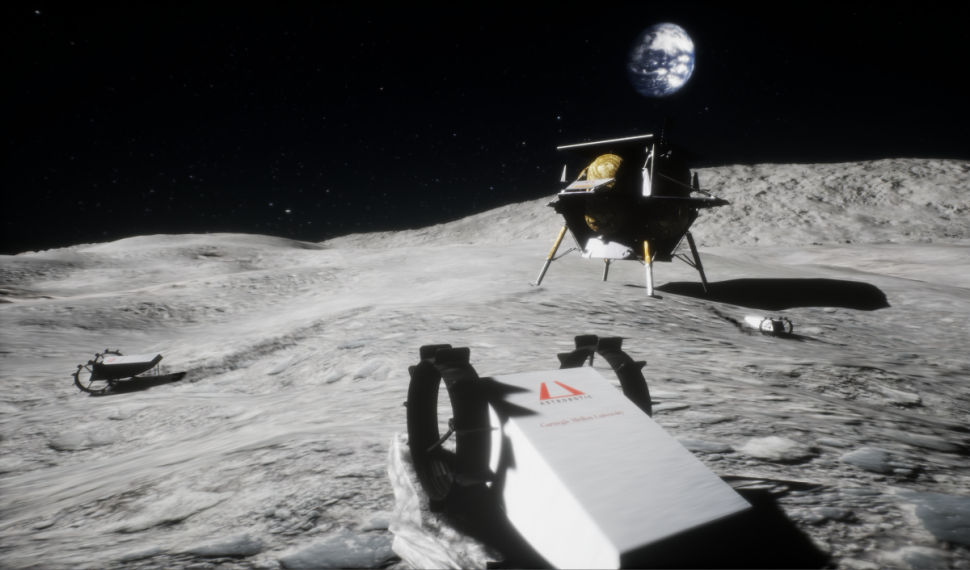 Plan and Add a Route

User can easily plan and add a route on the map interface. When user presses on the "add" icon, the control panel will appear on the right. User can determine the starting point of the route, and enter route distance and angle change in both absolute and relative.

To edit a route, user can tap anywhere on the planned route to trigger the "Route Editing" feature. User is able to see route data. He is also able to click and drag to edit an existing route, or he can type in new distance and route angle on the control panel.

Map Features from the Image Viewer

Users can click on an obstacle to activate circumnavigation feature. The map interface will show users a safe zone from the obstacle. Users can input start point, end point, radius, and direction of the rover to circumnavigate and take photos of the obstacle.

Design for the Lightest Rover (2kg) Ever on the Moon.

Integration, launch, transit, landing and deployment will be taken care by Astrobotic. Once deployed on the lunar surface, the CubeRover tele-operations team take over and start to explore the lunar surface to conduct the blast ejecta characterization. Tele-operations has many different components, such as the Image Viewer, Telemetry, Command Line, and the Shared Map.

We thrive to design small, medium, and large-sized CubeRovers to support government agencies, companies, and universities throughout the world. Each CubeRover will be customized for specific science and exploration missions such as resource prospecting, in-situ resource utilization, geophysical investigations, and much more. 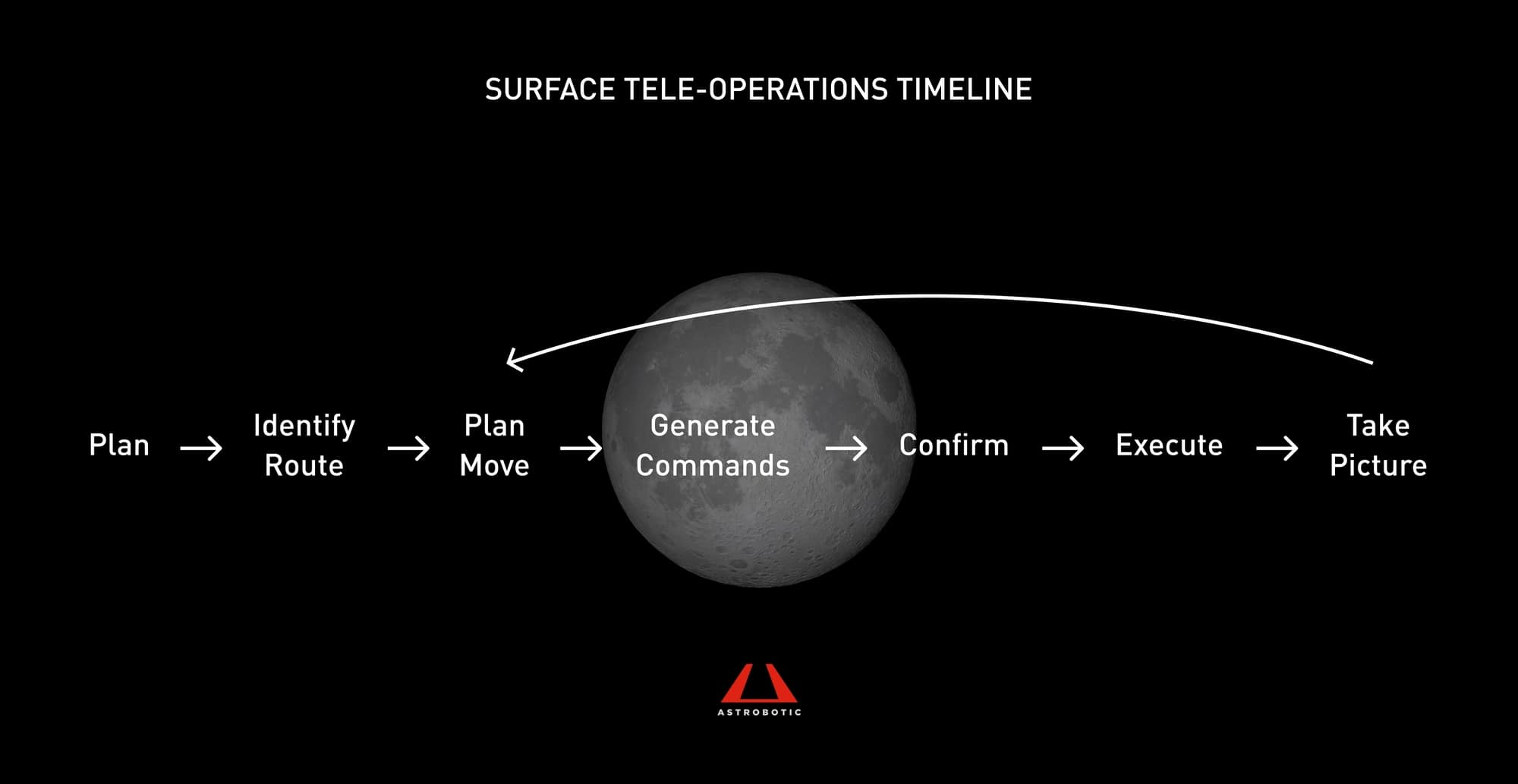 As part of the Tele-Operation team, I was responsible for designing the Shared Map - a tool which helps the navigators to control the rover on the moon.

We currently face four main problems for CubeRover: the delay between rover and controller as well as image processing time, hostile lunar environment, and obstacles that rovers might meet when they travel.

Exploring the Space with Different Stakeholders

Communication is always the key, and sending the rover to the moon is not a one person's mission. We have the Science Team, Robotics Team, Ground Testing Team, and Tele-operation Team. So how do we explore the space with so many teams on board and keep each other informed? 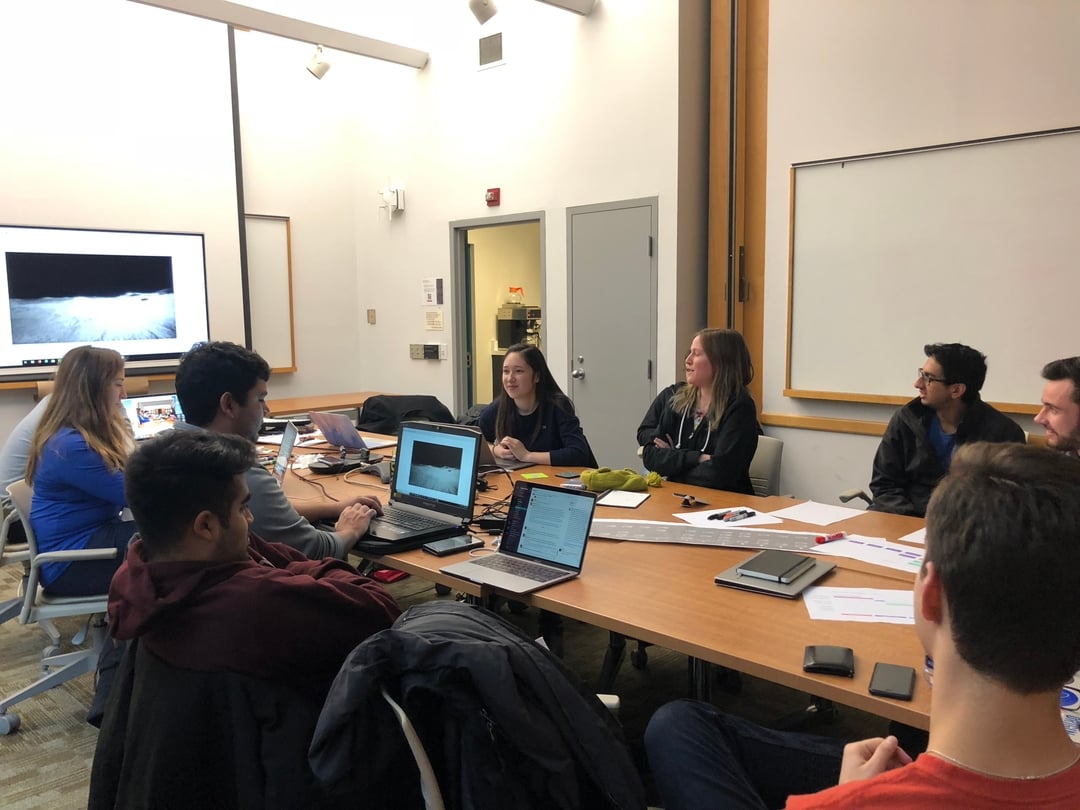 To align our goals and make conversations among teams more seamless, we created a communication diagram to visualize the flow of information during the mission.

The tele-operations communication diagram breaks down missions into research + predict, inform, plan and execution. All teams can clearly where they belong in the system and how other teams coordinate. 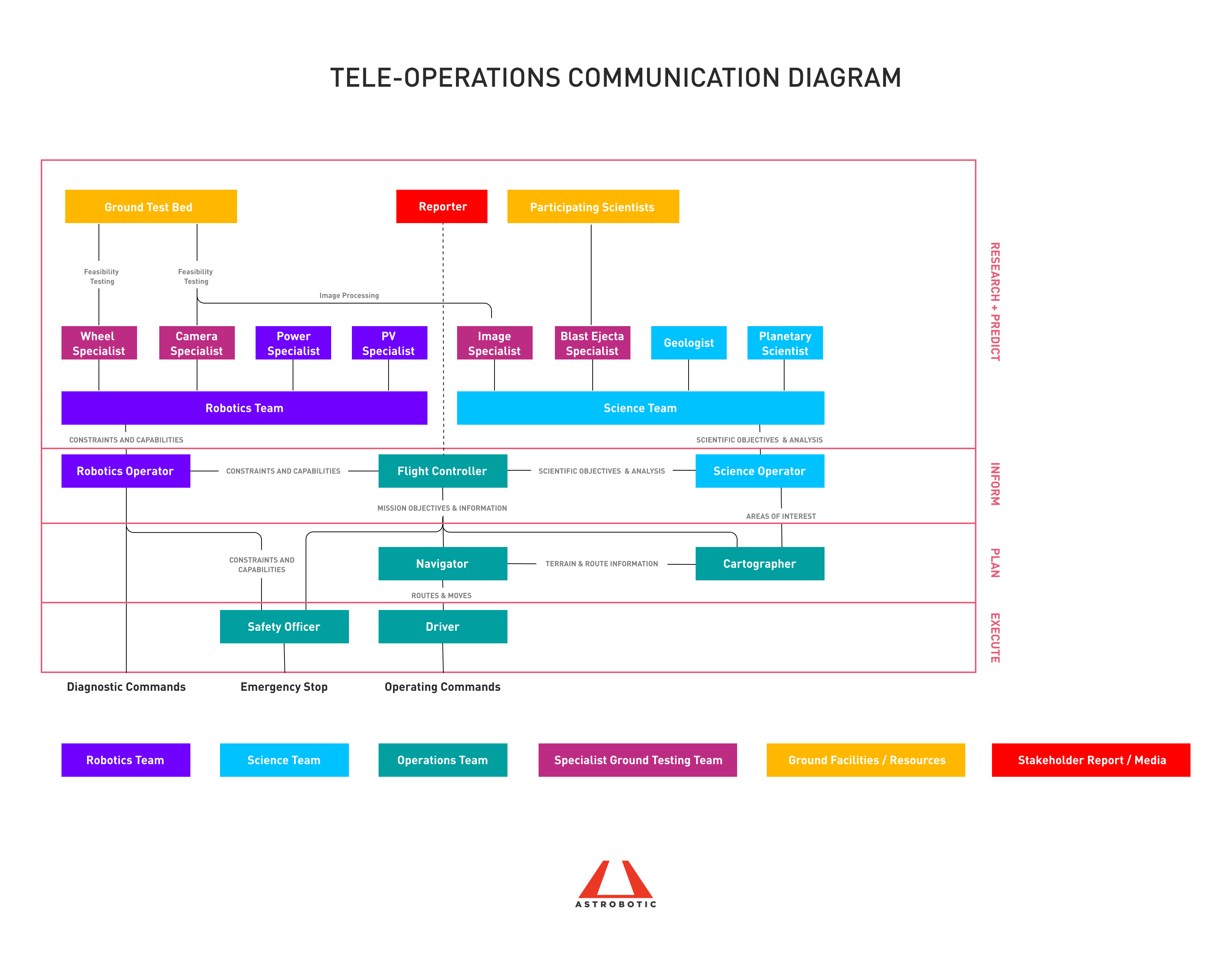 Iterate with the Mission Navigators 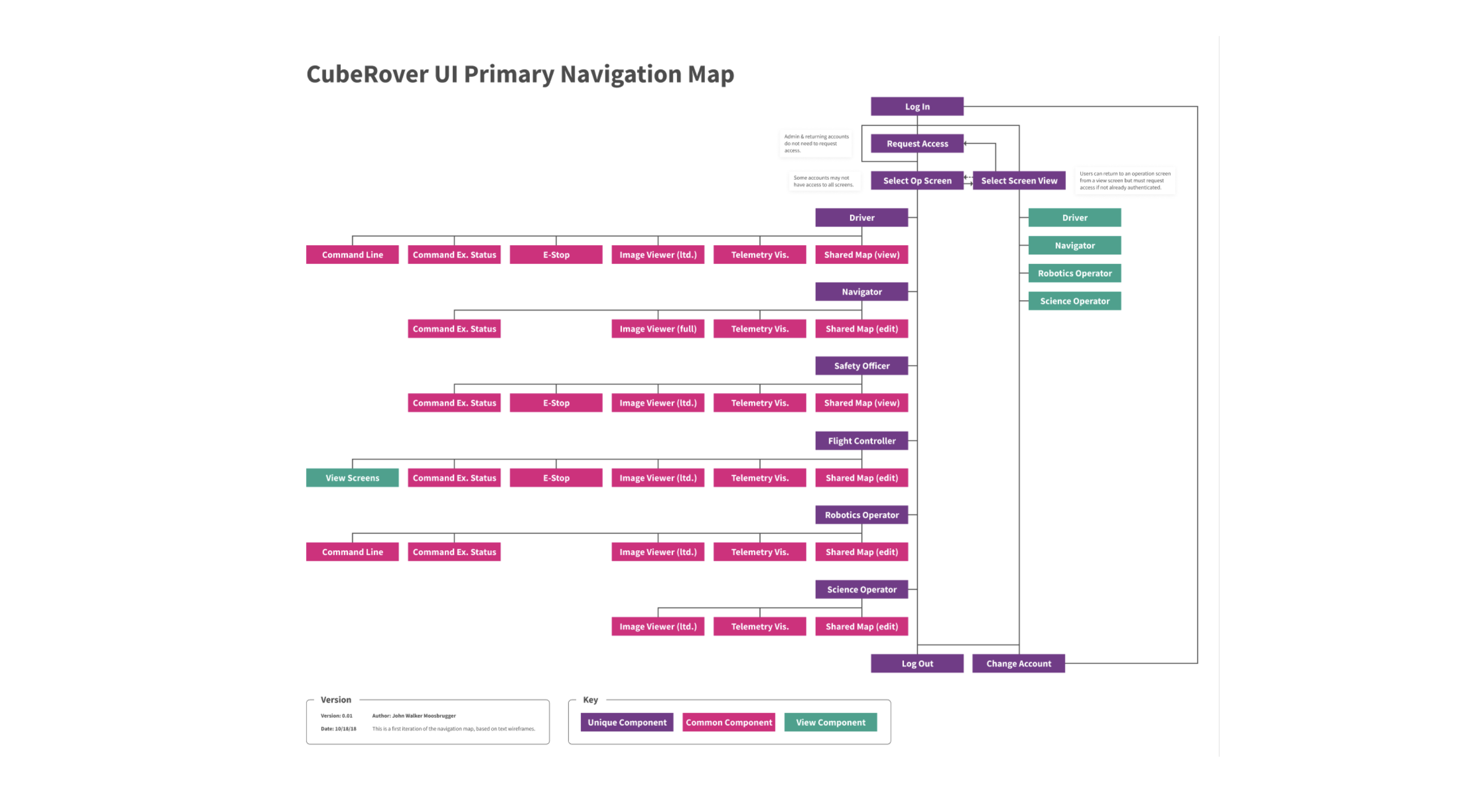 Cuberover compresses and crops image from lander to reduce file-size to 41KB (10s of transmission). It then measures a distance on the lander which is of a known size and extrapolate that to estimate width of FOV (field of view) at the lander. It will use the width of the FOV to estimate the rover’s distance from lander. Then it will combine distance with known or estimated rotation data to find absolute location.

To make the design more intuitive and bridge the gap between the interface and technology for the navigator, we conducted storytelling with the navigator followed by user interviews and speed dating on storyboards of our ideas to further dive into the navigators' minds in order to create interfaces that match with their mental models.

From research with the cartographers, we learned that:

(1) The navigators need to be constantly aware of rover/lander's position and feature locations.
(2) The navigators need to plan for both high-level scientific areas of interest and intricate maneuvers
(3) Because of the time sensitive nature of the mission, there needs to be seamless integration with other Teleoperation tools. 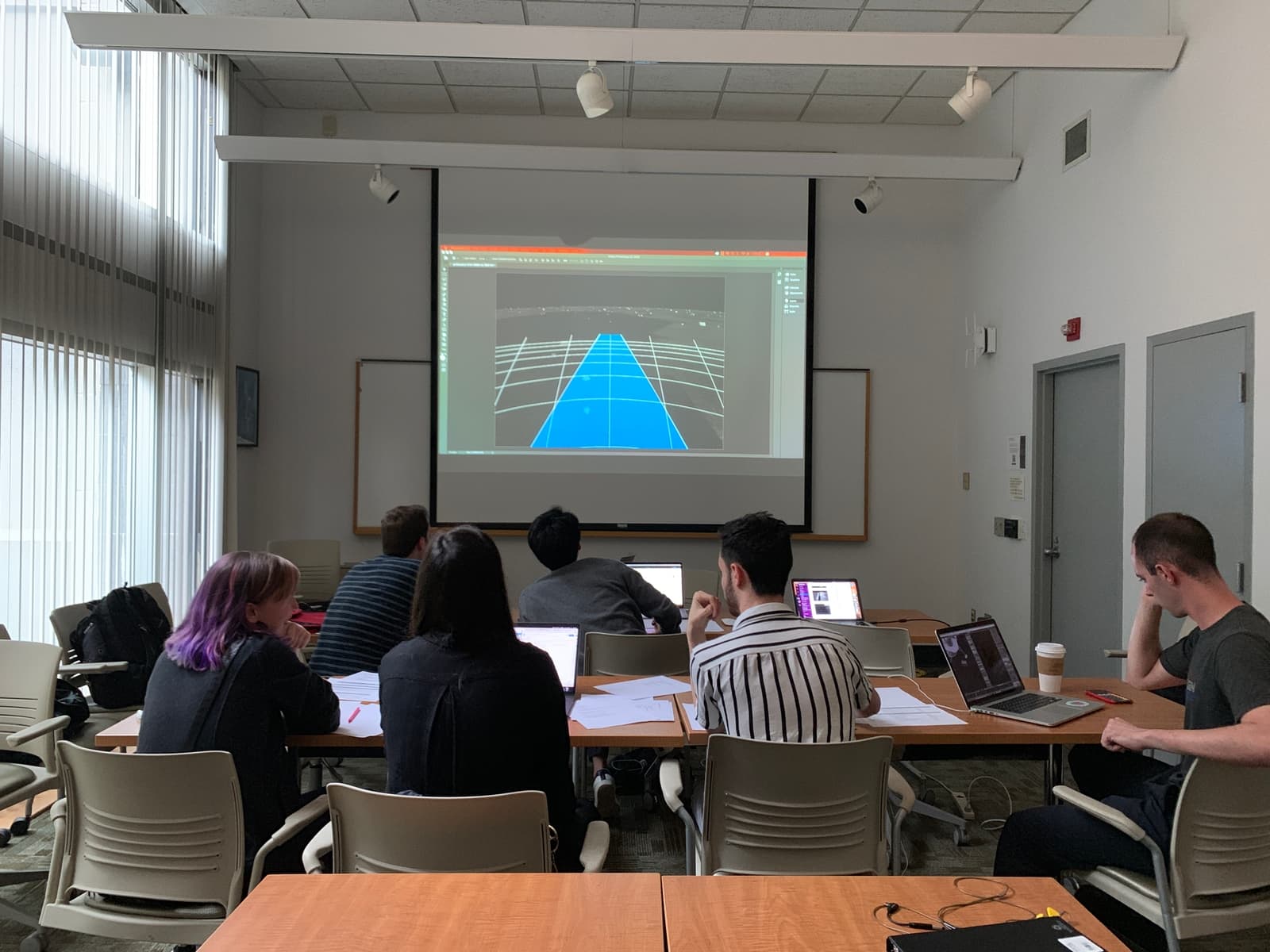 For each successive prototype’s vehicle characteristics, more precise characterization of the required motor inputs will be conducted. Optimizing the characterization and repeatability of this teleoperation model will allow for fewer maneuvering commands and thus faster cycle time and greater overall mission travel distance.

The following are some of our first iterations of designs for localization, obstacle identification, route planning, tool kit, and commands.

Our testing will also include demonstrations of correct operations during simulated mission phases, as well as compliant deployment procedures. Following a completed PAR, Astrobotic will integrate CubeRover with the lander and perform additional V&V activities to confirm a successful integration.avel distance. 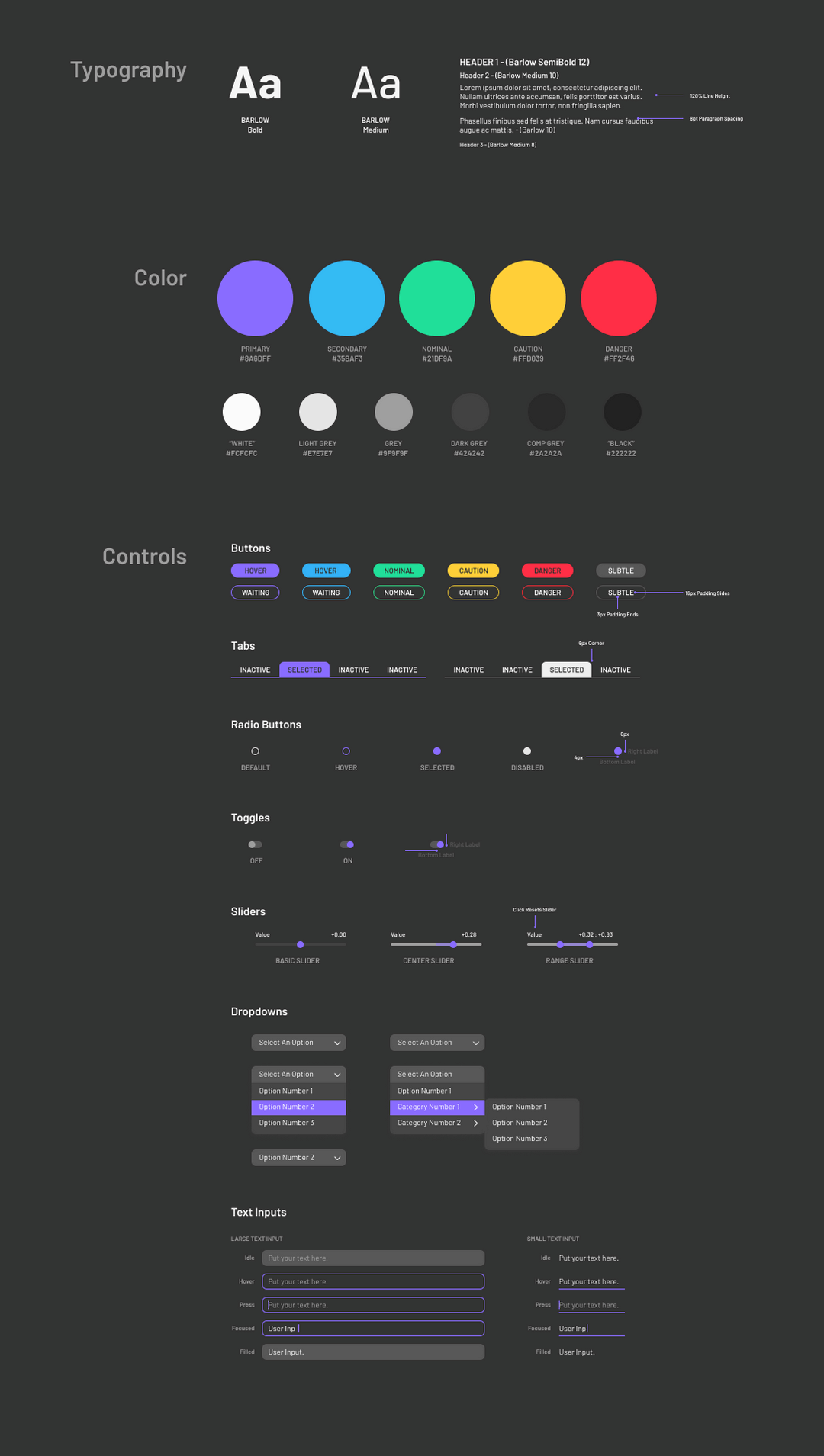 Our Shared Map team also took the initiative to design the design system for other CubeRover Design teams, such as the Image Viewer, Command Line, and Telemetry to make sure that our design is consistent and navigators do not have to learn when they encounter different parts of our system throughout the experience.

Designing for space with clients NASA and Astrobotics was a challenging yet rewarding experience. The task I was given, designing interfaces for the Telecommunication Team which controls the rover when it lands on the Moon, relies a lot on user research with cartographers and mission testing collaboratively with other cross-functional teams. Due to resource constraints, we were only able to conduct interviews with two cartographers on site. If I were given more resources and more time, I would further validate design decisions with more potential users to confirm their mental models.

Furthermore, I would love to see how our designs could scale up and allow multiple navigators collaborate on a same mission to identify obstacles, circumnavigate the rover, and collect data.

In the end, the mission has not ended. Please let me know if you are interested in the project, and I would be happy to chat about details. 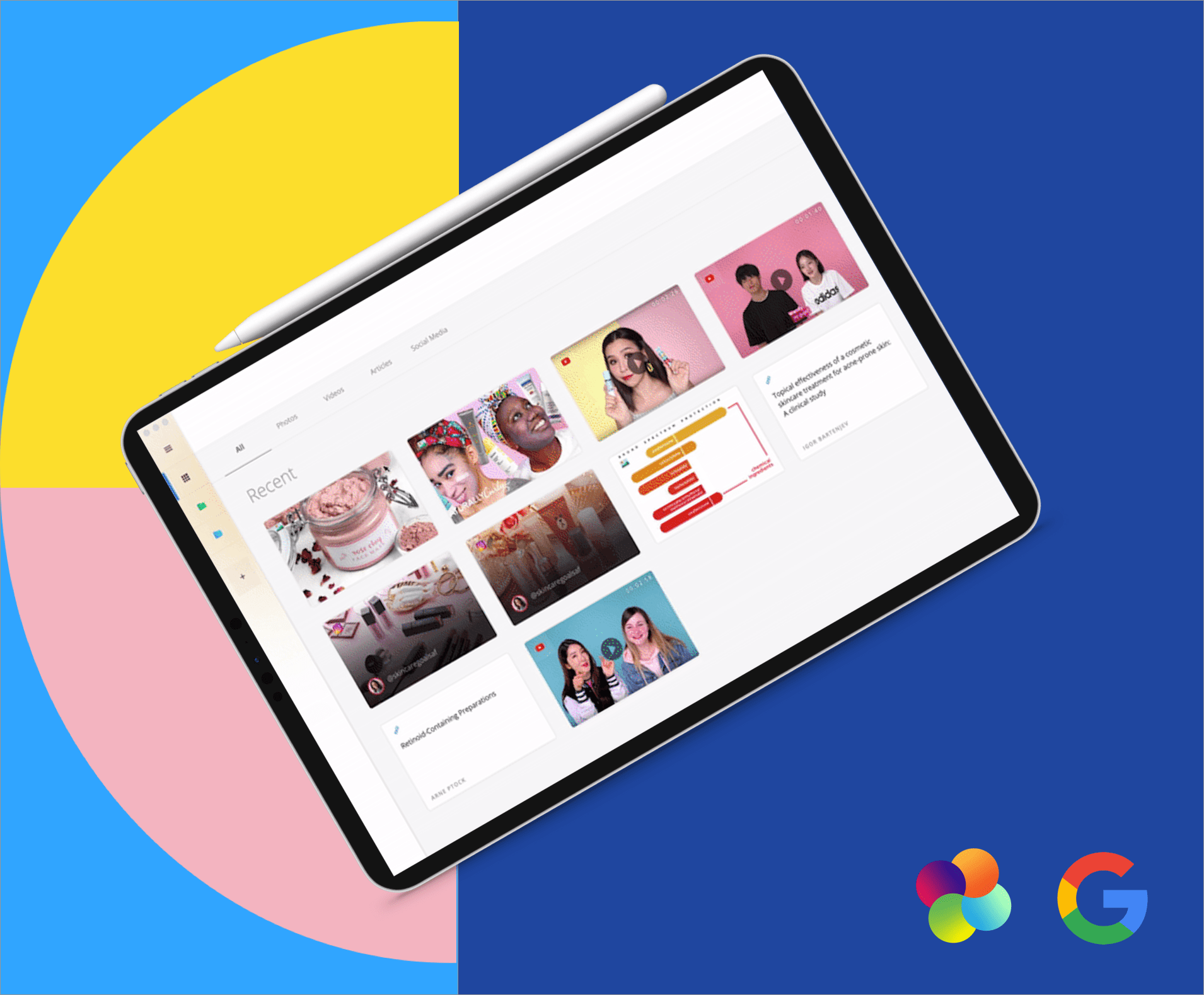 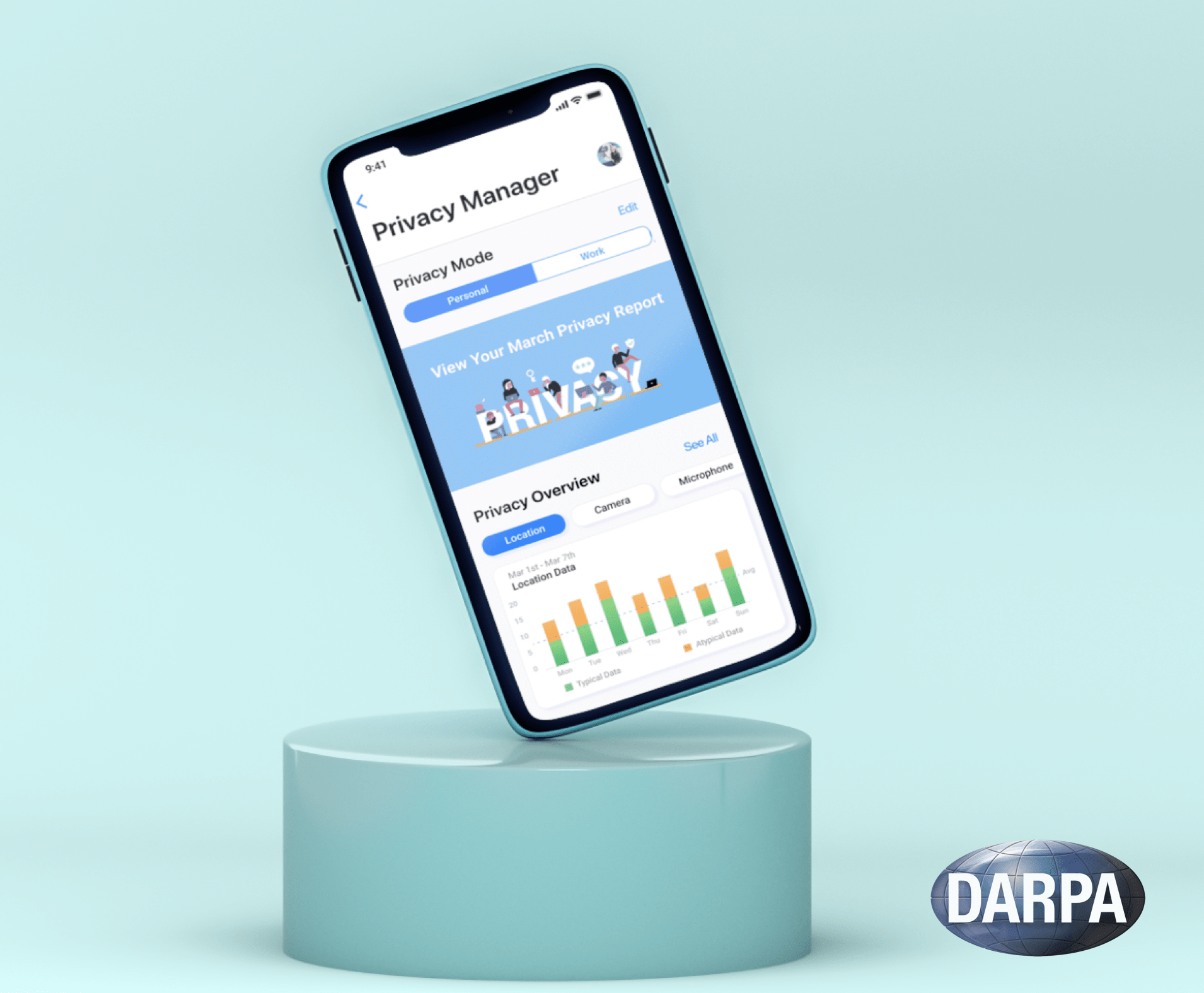 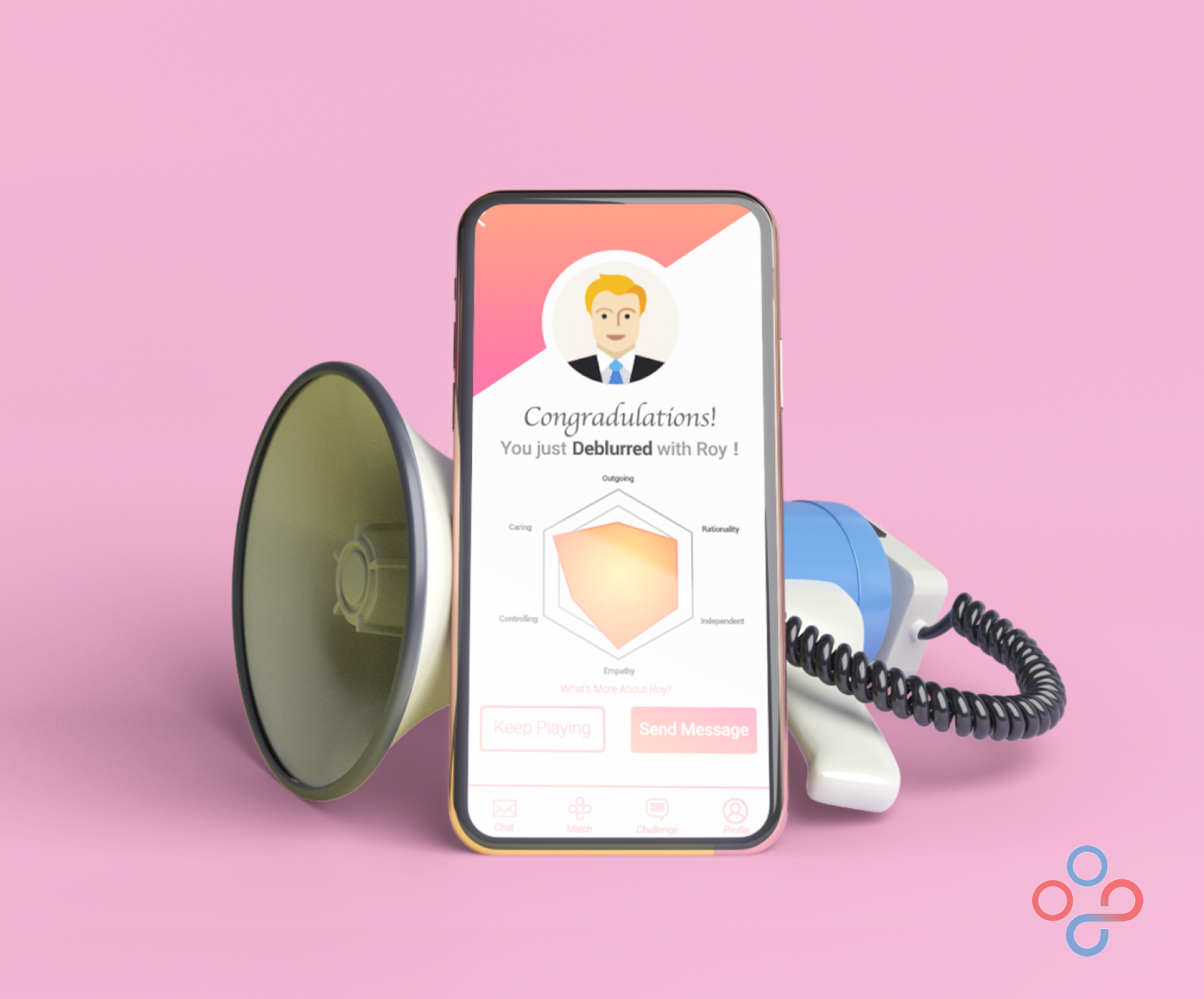 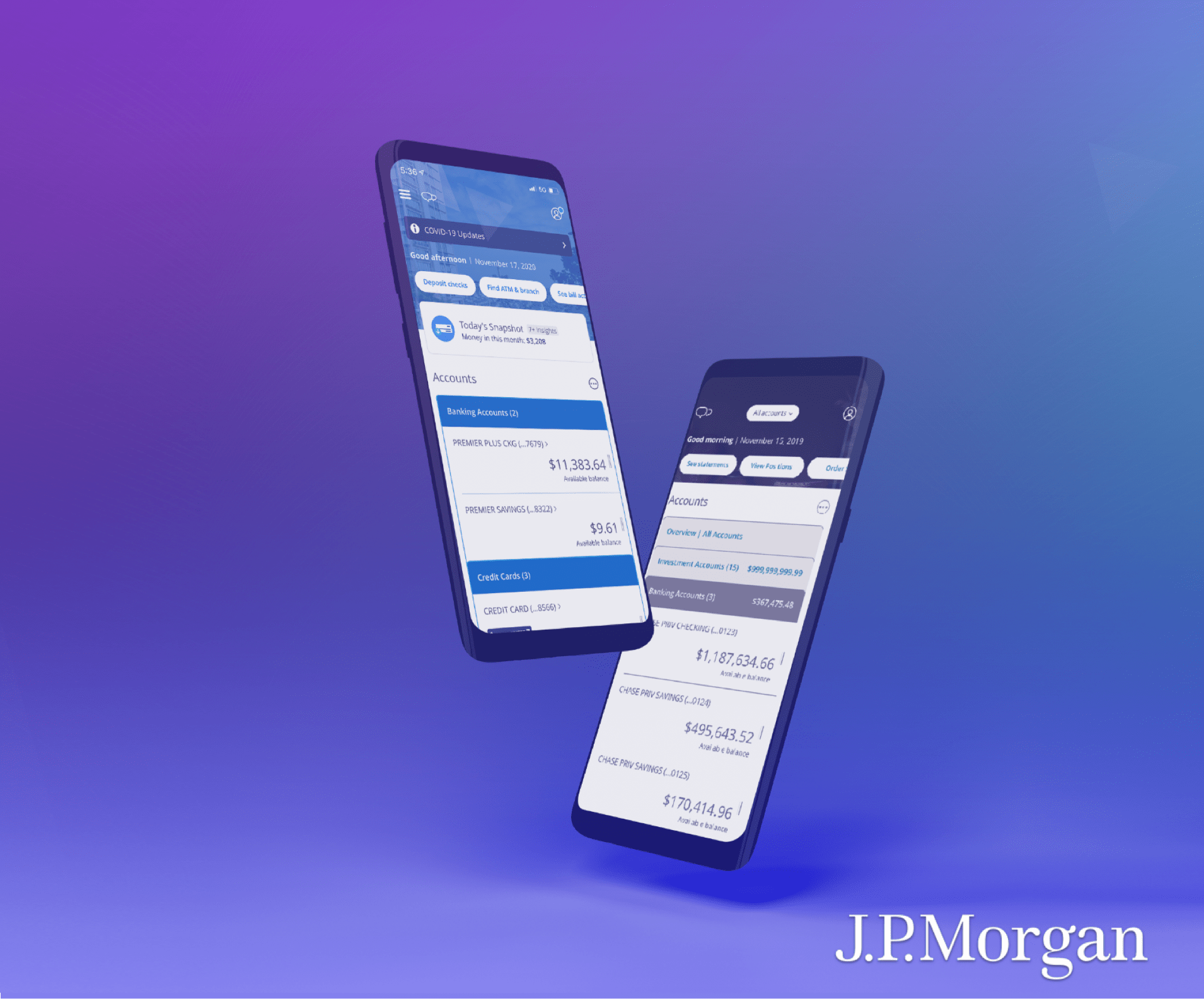 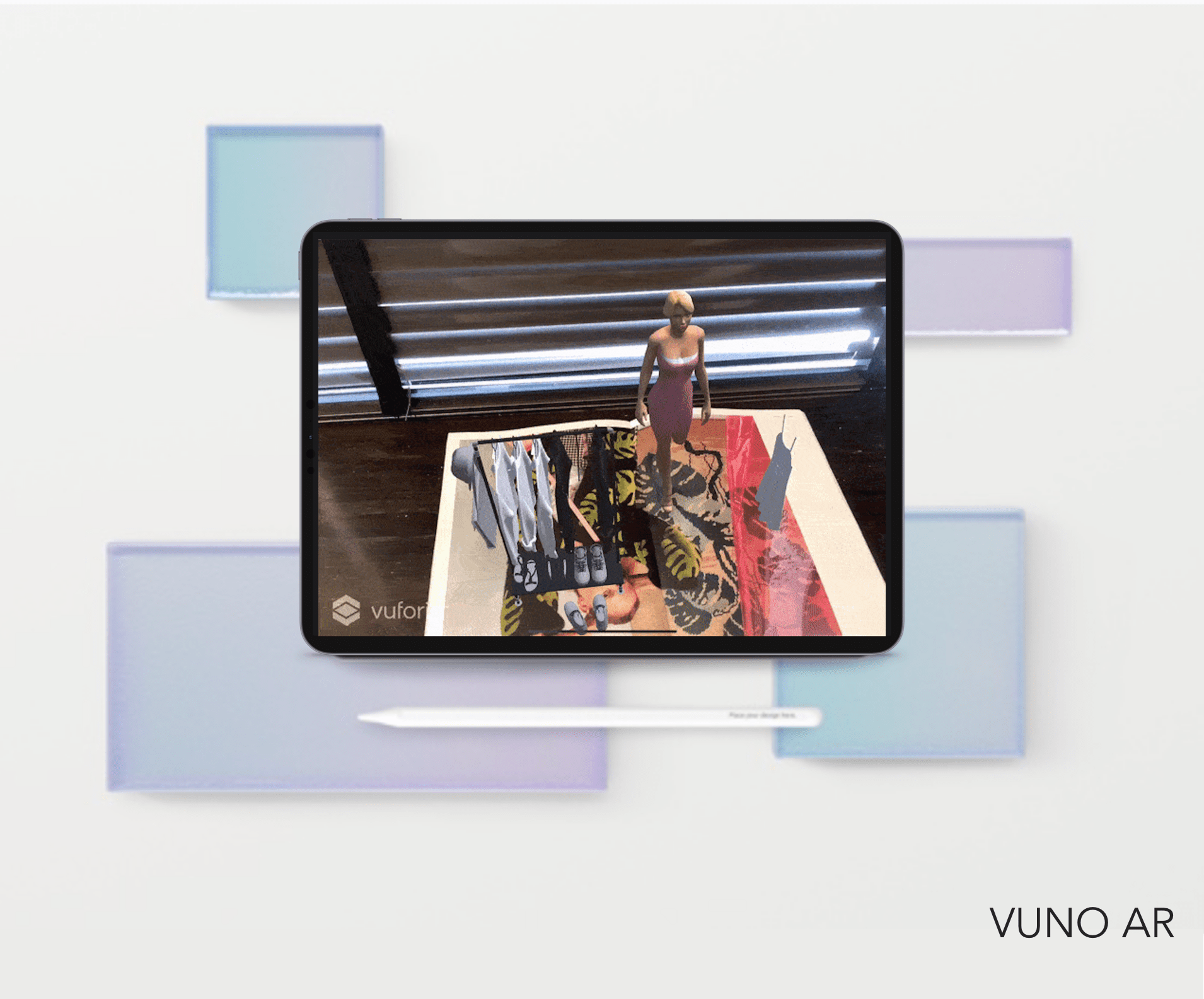 Learn More About Me :)